To Our Valued Customers

We hunters can feel it in the air as the hunting season approaches and if you have your loyal canine companion with you he's dreaming of the early sunrises and sun-drenched marshes under his paws. With these fond childhood memories, we at Mack's Prairie Wings have put together for you the biggest and most extensive waterfowl hunting product catalog to date.
The one thing we want you to know about Mack's Prairie Wings is that we hunt ducks! Mack's specializes in waterfowl gear - period. Duck hunters choose the gear that goes onto the pages of our catalogs and onto the shelves into our stores, and that's why Mack's will always be able to offer the best selection of waterfowl-related products in the world at the most competitive prices.

In fact, if you find what you're looking for somewhere else at a better price, we would still appreciate the chance to do business with you so please give us a call or better yet, stop by and see our ever expanding waterfowl mecca in Stuttgart, Arkansas. With our hunters' dedicated help, we're continuing to grow bigger every year, and as we grow we're "teaching the next generation the heritage of the outdoor sportsman." As the vision of Mack's Prairie Wings continues to grow through every hunter and the love of the outdoors continues to grow to each new generation-- I wish you happy hunting.
Marion McCollum 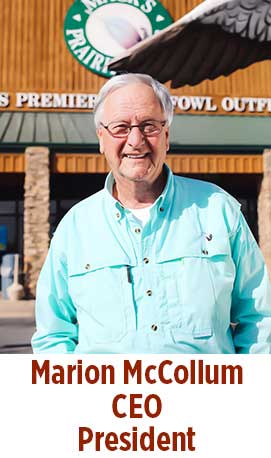 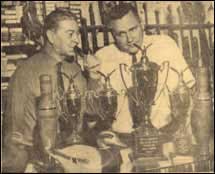 BUSINESS WAS SO GOOD THAT OWNER M.T. “MACK” MCCOLLUM DECIDED TO TAKE THE SPORTING GOODS OUT OF THE HARDWARE STORE AND OPEN A SEPARATE STORE IN 1944.

McCollum’s Hardware was on Main Street and McCollum acquired the building next door recently vacated by another business. McCollum then cut an archway in the wall between the stores and moved the sporting goods into that space. So began Mack’s Sport Shop. It’s been said many times that it was the first full-line sporting goods store to be found. I n 1961 M.T. McCollum’s son, M.T. Jr., better known as “Marion”, joined his dad full time in the business. By 1970 it was time to expand again. The business was moved to Highway 79 in a 3,200 square foot building decorated with various animal and fish mounts and filled with every item for the duck hunter becoming a tourist attraction during the hunting season. M.T. “Mack” McCollum departed this life in 1979.

MACK’S BECAME EVEN MORE OF A DRAW AFTER 1993 WHEN MARION AND CHUCK ADDED A MAIL ORDER CATALOG BUSINESS CALLED MACK’S PRAIRIE WINGS
The store was enlarged to over 18,000 square feet primarily containing inventory waiting to go on the shelf or through the mail. The Mack’s Prairie Wing’s catalog has been such a success that 2.4 million were mailed out in 2002.

TO KEEP UP WITH THE TREMENDOUS GROWTH, IN THE FALL OF 2000, THE RETAIL STORE MACK’S PRAIRIE WINGS, CELEBRATED THE GRAND OPENING OF ITS NEW LOCATION ON U.S.
HIGHWAY 63 IN STUTTGART, AR, WITH OVER 55,000 SQUARE FEET.

Little did Mack’s owner Marion McCollum know that within the next years to come, the retail store and the mail-order catalog would be expanding again, and again. Today Mack’s Prairie Wings stands at over 120,000 square feet, of which 40,000 is retail showroom space. The new store is world known as The Waterfowl Mecca in the heart of the “Rice and Duck Capital of the World.”
The fact that more Winchester steel shotgun shells are sold at Mack’s Prairie Wings than any other retail location in the world says it all about today’s version of McCollum’s Hardware, the name of the original sporting goods store.

WINCHESTER AMMUNITION HAS HONORED MACK’S PRAIRIE WINGS AS THE NO. 1 STEEL SHOT DEALER IN THE WORLD FOR 26 CONSECUTIVE YEARS.
THAT’S MACK’S...WE WALK DUCK, WE TALK DUCK, WE ARE DUCK!
“We grew up to hunt. The legacy of my Pa, Mack McCollum, world duck calling champion, is still alive and growing through myself and America’s Premier Waterfowl Outfitter, Mack’s Prairie Wings. The hunt begins here.”

EXECUTIVE VICE PRESIDENT, CHUCK LOCK HAS BEEN A PART OF MACK’S FOR OVER 44 YEARS NOW. 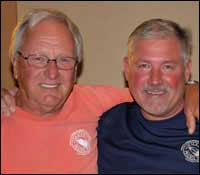 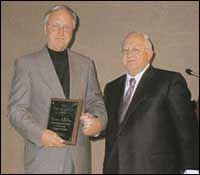 Marion McCollum of Stuttgart was recognized on September 5 at the 2008 Outdoor Hall of Fame banquet and ceremony held at the State House Convention Center in Little Rock. McCollum, who developed Mack's Sports Shop into Mack's Prairie Wings, which is a leading national mail order sales corporation, is a member of the multi-generation Grand Prairie family heavily involved in duck hunting and the area's habitat. Along with his development of Mack's Prairie Wings, McCollum was an active and effective commissioner with the Arkansas Game and Fish Commission from 1995 to 2002.

McCollum's seven years as a commissioner were at a pivotal time for the state wildlife and conservation agency because of the campaign for a conservation sales tax was passed by voters in November of 1996 and went into effect July 1, 1997. McCollum was closely involved with the other commissioners in using the new money for the purposes Arkansans wanted, which was more enforcement, more public hunting and fishing areas and more conservation education. The first major project was the acquisition of what is now Rick Evans Grandview Prairieview Management Area and Conservation Center, west of Hope.

More wildlife officers were trained and added to the staff that included at least two officers in every country of the state. Four nature planned and constructed officers have been highly successful in their educational roles. Through his years as a merchant and as a commissioner, McCollum has followed a keen interest in hunting and fishing, McCollum especially has a fondness for the hunting of white-fronted geese, often called specklebellies. In his business activities, McCollum has followed a common thread of many other entrepreneurs. He seeks out and hires competent people, gives them the necessary assignments and expects their efforts to result in favorable bottom lines for the business.

LEGENDS OF THE OUTDOORS HALL OF FAME 2007

If you’ve been to Arkansas to hunt ducks, you have more than likely visited Mack's Sport Shop, home of Mack's Prairie Wings mail order catalog. The Waterfowl Mecca Store started by Marion's dad, "Mack", back in 1944. Marion was born in Stuttgart, Arkansas, the Rice and Duck Capital of the World, on February 9, 1942 to Marion "Mack" McCollum and Ruth Cannon McCollum.

Marion discovered his love for the outdoors by hunting with his father at a very young age. In 1961, Marion began his adventure in the sporting goods business by becoming a partner with his father. Chuck Lock joined Marion in 1976 to help service customers with enthusiasm and hands on experience. Mack departed his life in 1979. In 1993, Mack's Prairie Wings dropped its first mail order catalog, what is known today as "America's Premier Waterfowl Outfitter". With the growth from the catalog, a new facility was required in 2000 that now stands at 102,000 square feet. Marion shares his success in the mail order business with Chuck. Together they work with many vendors in the waterfowl industry in developing new products to better enhance the sport.

Marion McCollum is a lifetime member of Ducks Unlimited, Waterfowl USA, and Delta Waterfowl. He is currently on the Board of the Arkansas Game and Fish Foundation and served on the Arkansas Game and Fish Commission from 1995-2002, where he served as Chairman from 2001-2002. Marion participates in many activities that teach the boys and girls of today about hunting and fishing. His business strives in "Teaching the Next Generation the Heritage of the Outdoor Sportsman".

Marion and his wife JoAnn love to fish for crappie in the spring and summer months. From fall thru early spring, Marion spends his free time hunting dove, duck, pheasant, and turkey with his friends. 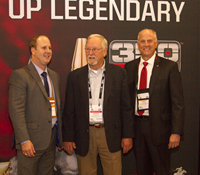